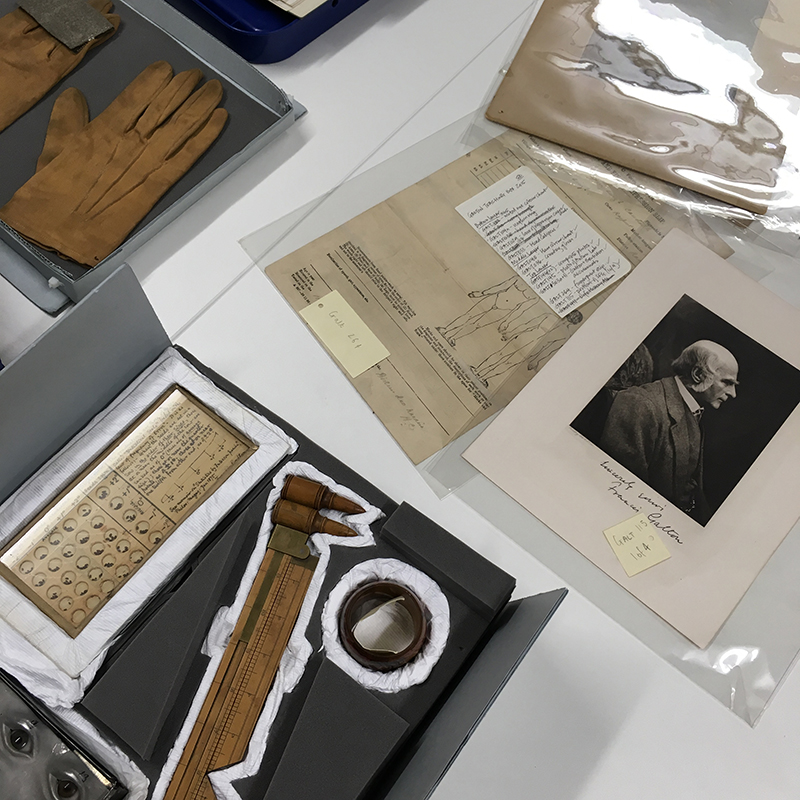 This course examined the idea of the survey. Using observational techniques; historic and contemporary measuring devices; and their own invented apparatus, students identified and recorded salient quantities and qualities of a body in the form of 1:1 drawings.

Our enquiries began within the Galton Collection of at University College London. Galton, a poineering 19th Century British scientist, invented various instruments which he used to measure and collect anthropometric data. Curator Subhadra Das introduced us to a selection of these devices such as the Hyperscope (for seeing over the heads of crowds), Counting Gloves (which allowed him to collect data without being observed), and Craniometers (for measuring the size and shape of the skull). We discussed their visionary social intentions and sometimes darker political implications.

Using Galton’s devices as a starting-point, students adapted, designed and used their own apparatus with which to carry out individual surveys. Students learned how to use contemporary industry-standard tools hand-in-hand with their own invented devices, cutting through extraneous detail in order to identify the salient quantities and qualities of a body. We looked at exemplary drawing precedents in order for each student to identify an appropriate visual language of their own. Finally, findings were represented as plans, sections, elevations, timelines, diagrams or any other appropriate form of drawing. These drawings described students’ close reading of the body’s specific “conditions, situations, and values”*, and in so doing greater insight was gained into the limitations and the creative potential of taking its measure.

*’Survey, v, 1.Trans. To examine and ascertain the condition, situation, or value of, formally or officially, e.g. the boundaries, tenure, value, etc. of an estate, a building or structure, accounts, or the like; more widely, to have the oversight of, supervise.’ p309, Oxford English Dictionary