DESIGN AND REALISATION OF BESPOKE CARRARA AND DEVONIAN PAVING AND FREESTANDING STONES WITHIN A RESTORED VICTORIAN CIVIC GARDEN.

In July 2009 I was commissioned by Torbay Council to develop a sculpture project for Royal Terrace Gardens, Torquay, as part of its major redevelopment of this Victorian Civic garden. The project uses two materials: white Carrara Marble, sourced from North-West Italy, and pink/grey Devon limestone from Stoneycombe, Devon. The commission is composed of three parts: three identically-carved Carrara stones; three acid-etched Devon stones; and a strip of paving following the length of the garden, composed of alternating pieces of Carrara marble and Devon limestone. The gardens were formally opened on October 2nd 1010 during the Royal Terrace Gardens Festival. The Royal Terrace Gardens were originally laid out in the mid 19th century, when Torquay was developing as a seaside resort to rival those of the Italian Riviera. Ruskin described Torquay as 'The Italy of England', and Napoleon compared the scenery with Porto Ferrajo, Elba. The Royal Terrace Gardens are built into the side of a sea cliff, with reclaimed land at its base. Much of the steep slope of the gardens is covered in vegetation, but the distinctive pink bedrock remains visible in places. 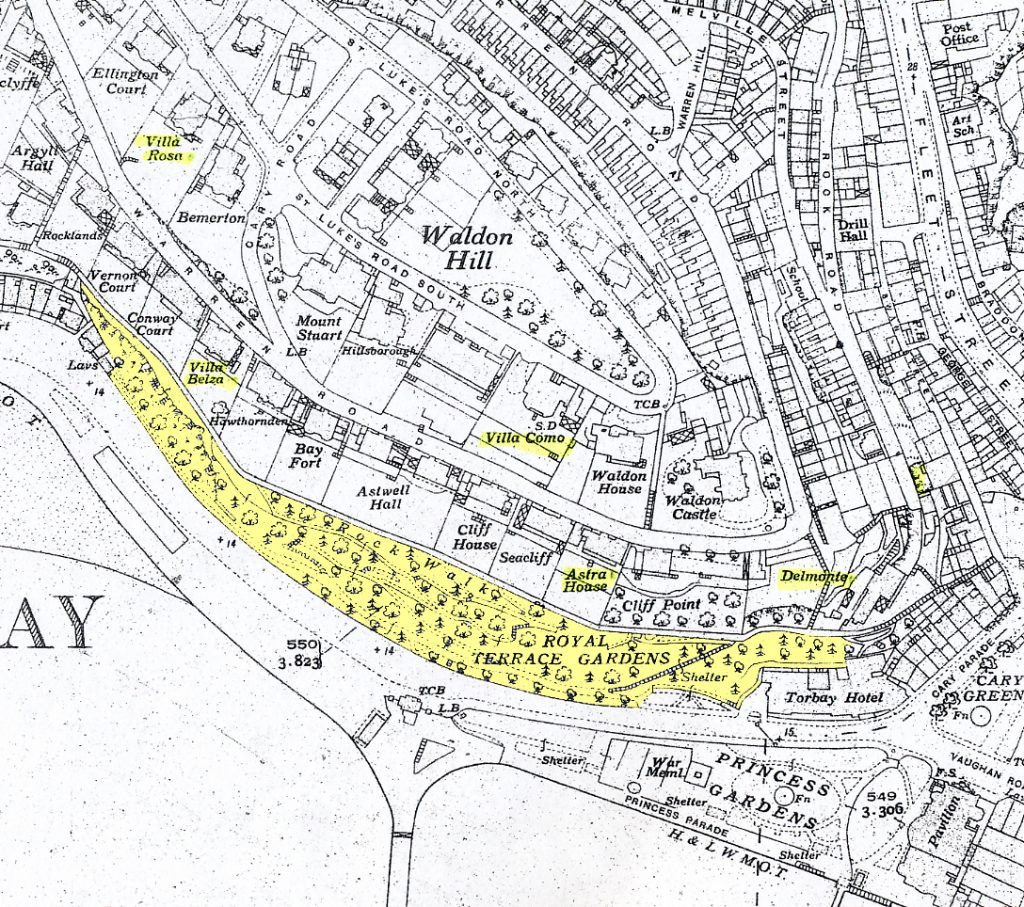 Elegant Italianate villas, with names such as Sorrento, Rosa, Delmonte, Florence, Quintella and Como, were built on the hillside above the gardens and around the bay. An early advertising slogan stated that ‘the general effect of the white houses, the grey limestone cliffs and the foliage and greensward forming the ground to the whole, is unusually picturesque’. Much of Torquay's 19th Century architecture is stylistically indebted to the Italian Riviera. Russell, in his 1960 ‘A History of Torbay’, wonders ‘whether the old Italian inspiration might not be renewed afresh. The flourishing city of Genoa, like Torquay, is set upon hills rising boldly from the sea, cut through by deep and narrow ravines.' 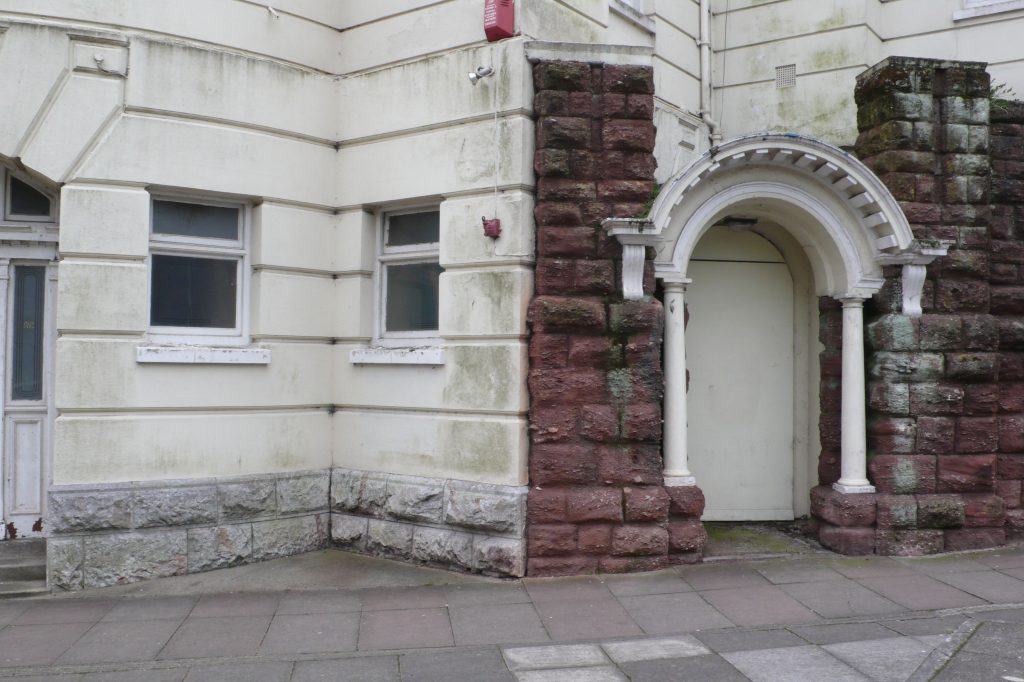 White-painted classical-influenced render and carpentry, and rusticated blocks of the local dark red and pink/grey Devonian limestone. It seemed a paradox that ‘The English Riviera’ emulates an Italian ideal, while loosing its native masonry industry specialising in the very material that makes the local landscape so unique and distinctive. Carrara, the white, quintessentially classical Italian stone, is now commonly available throughout the UK as a premium material for sculpture and decorative architectural purposes, while the local limestone is now only quarried to be crushed for aggregate. My project presented an ideal opportunity to reconsider and re-present these materials in contemporary sculptural terms. My starting point in developing the freestanding stones for the garden was my long-standing interest in Chinese scholars rocks. These weathered stones were historically collected and placed in gardens to be appreciated both for their sculptural shapes and to remind the visitor of the landscapes from which they had been found. While their appearance seems entirely natural, such stones were commonly ‘improved’ by being polished, coloured, or re-carved by hand, as described in the ancient Suyuan Stone Catalogue: ‘The natives of lake Tai in Pingjiang obtain large stones. They first carve them, and then place them in the rapid currents. After a long time, the (altered) stones appeared to have been created by nature. Some are then treated with smoke while others are dyed black.’ ‘The workers dive deep into the water for the stones. Their job is difficult…If the stones have the shape of strange cliffs or peaks, the workers would work on them and immerse them in water again. After being washed by the water for a long time, the stones reveal beautifully textured patterns.' Such stones therefore exhibit a combination of natural formation, discerning selection, cultured modification and formal arrangement. Passages and image from the excellent Scholars’ rocks in Ancient China 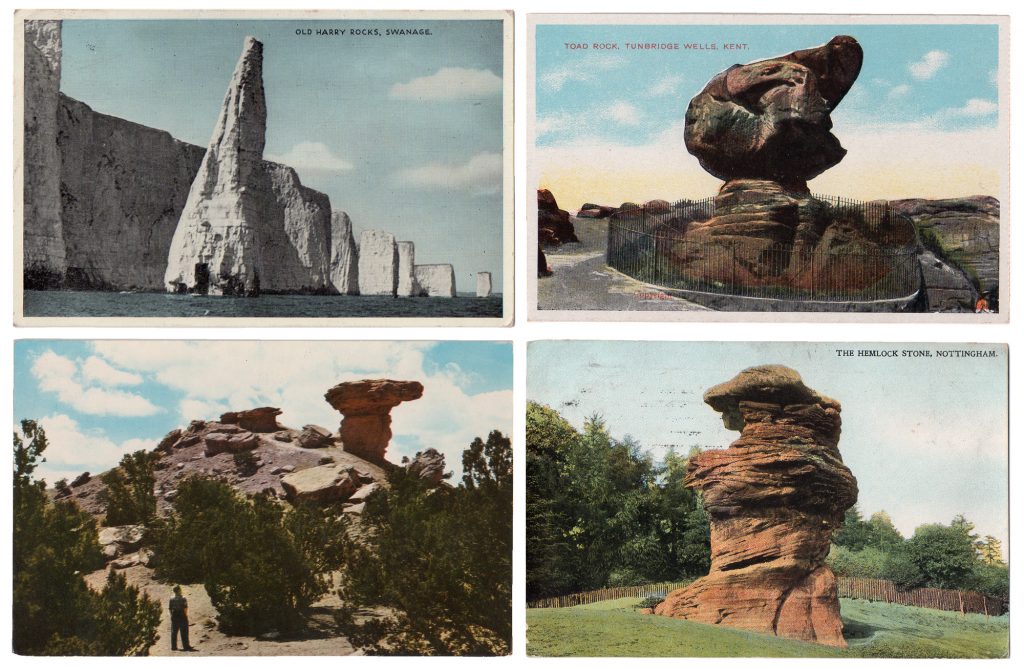 Stones iconic of their site from the UK and USA 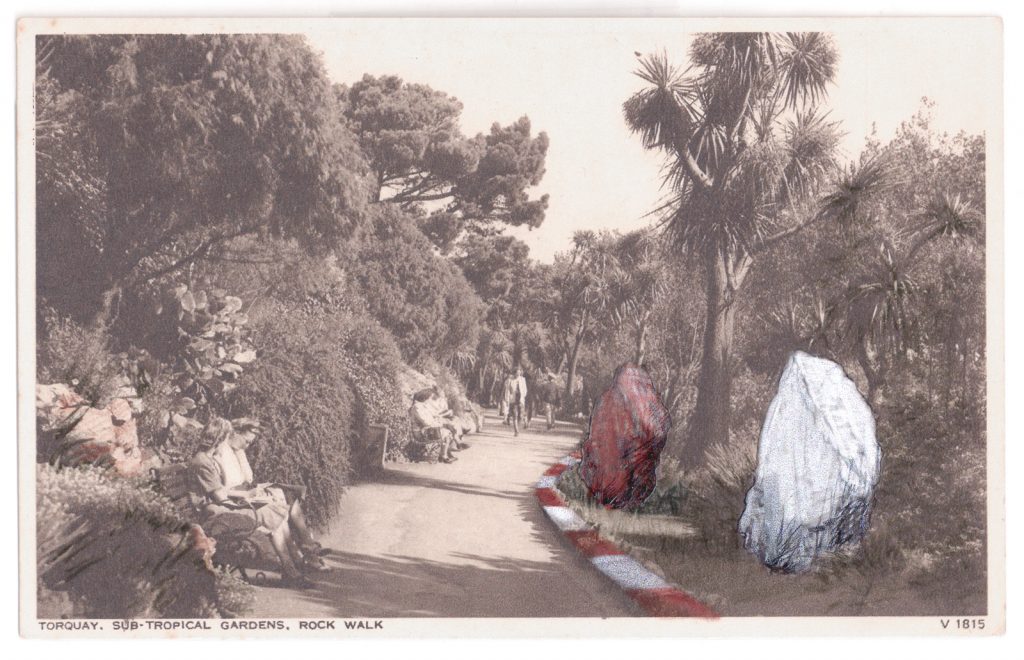 As the emphasis I wanted to make was on the material itself- and of its particularity of place- it seemed appropriate to incorporate it within the landscaping scheme. Devon limestone and Carrara marble has been specially cut and laid as strip of paving running the entire 250 metre length of the garden along the edge of the path. This replaces the original design suggestion of a Chinese granite kerb. The alternating pink and white stones are distinctive, and their length is that of an average pace so marking out the walked length of the garden. As well as being cut for paving, the two materials would also be incorporated into the garden in freestanding form. The bedrock at Royal Terrace Gardens is a semi-metamorphosed limestone which formed in the Middle Devonian period around 350 million years ago. It was laid down in a shallow, tropical sea and contains a rich variety corals, sponges and other fossilised remains. The geology of the site and the surrounding area is of international significance, and has been designated a Geopark by UNESCO. Devon’s limestones, such as those from Ashburton, Petit Tor and Ipplepen, have been prized historically for their distinctive, marble-like qualities, but are now only quarried to be crushed for aggregate. Stoneycombe Quarry on the outskirts of the nearby village of Kinkerswell, quarries limestone of the same kind as is exposed in the cliff at Royal Terrace Gardens. It was from this quarry that the Devon limestone used in my commission was sourced. Bardon uses explosives to extract stone for aggregate. This meant there was a risk of fractures which would make the blocks unreliable to use. As the limestone is no longer quarried as a dimension material, there were few people familiar with its use. The development of the project depended on investigating the possibilities and limitations of the stone. As part of this research, I had samples cut to check the integrity of the blocks, their viability for paving, and the nature of the material. The stone clearly had its limitations, but these were not insurmountable, and the quality and varied richness of the stone was clearly exciting. 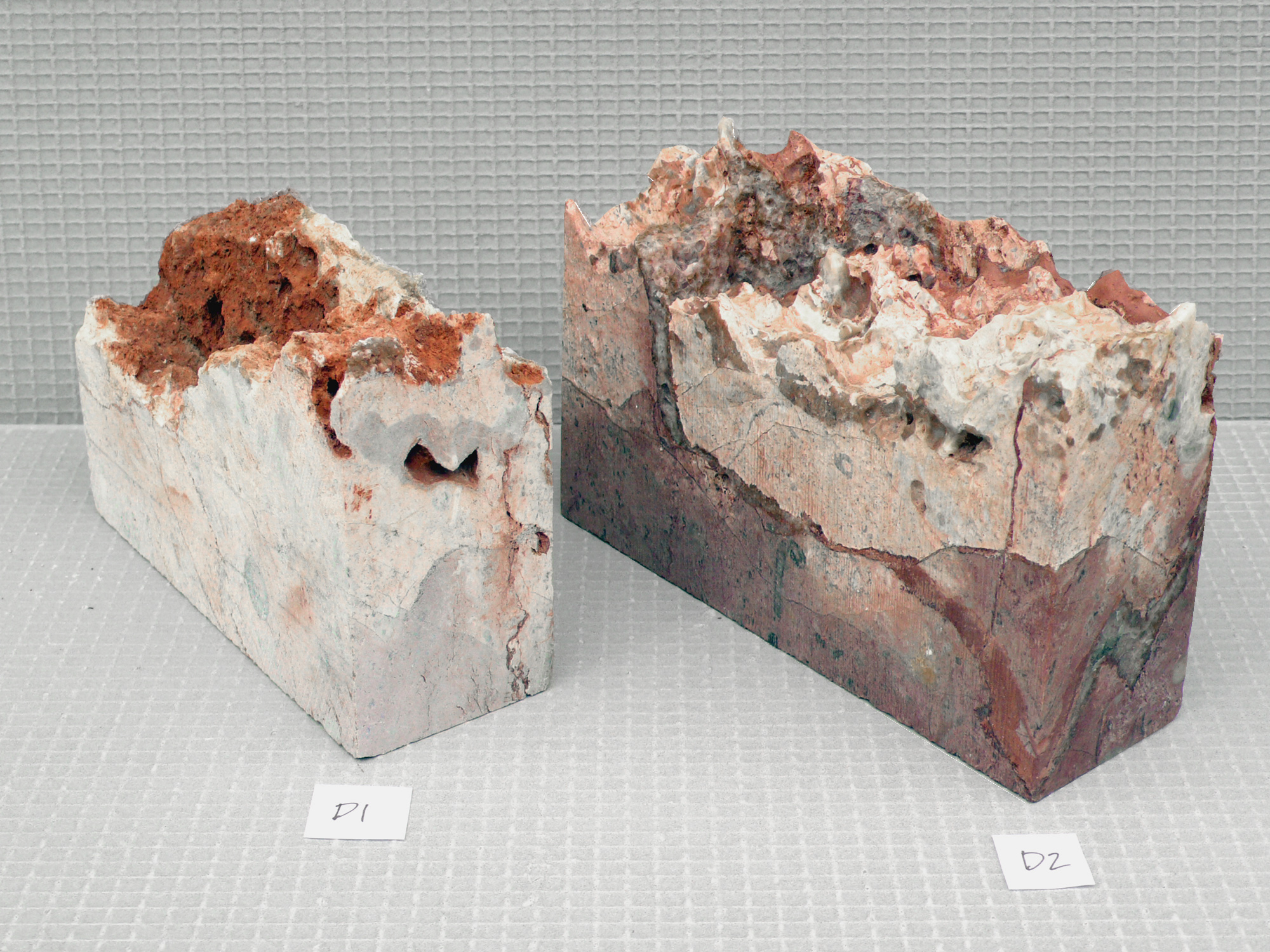 As well as the strip of paving, I wanted to make use of the stones in a more conventionally sculptural way. It did not seem appropriate to impose an image; the point was to reveal or make use of properties of the stones themselves. Returning to thinking about the scholar’s rocks, I decided to investigate other processes that could be applied to affect the stone’s shape and surface. My intention was to make a set of finished objects that on first glance looked similarly ‘natural’, but on close inspection revealed traces of their making. Remembering that limestone is etched by acid, I began a series of experiments, expecting that the acid would bite the surface irregularly so revealing and shaping the stone’s fossil content. Instead, the effect was to smoothen and polish the surface, producing a curious and distinctive striated finish which displays the stone’s character to its fullest extent. The picture shows, to the left, half a section of untreated stone. The other half has been etched. The striations produced are shown clearly on the following page. 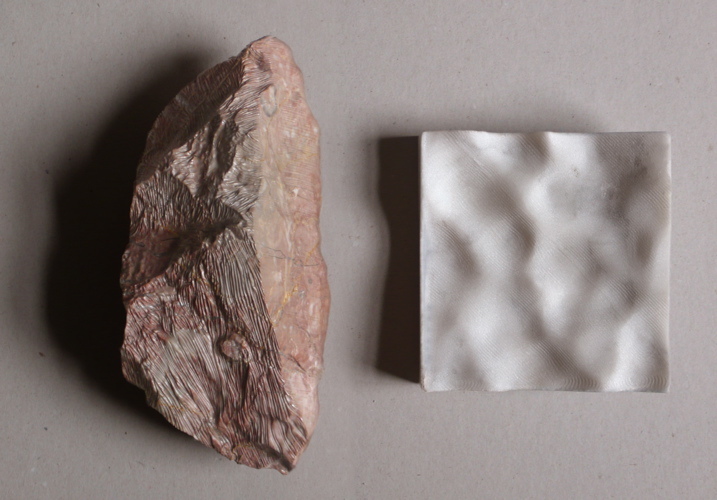 Based on these experiments, I decided to pair three large acid-etched Devon stones with three identically machine-cut Carrara stones. A treated Devon sample is shown here on the left, with a machined Carrara sample on the right. While the Carrara shapes were to be hand-made in clay and machine-cut in stone, masonry tools would be used to ‘improve’ the three Devon stones by hand before their surfaces were acid-etched. The making of each stone would therefore involve both hand-made and chemical/mechanical processes in their production, with both methods producing distinctive striations over the stones’ contours.

For the three Carrara stones, I first made a full-sized clay model in my studio. Working without direct reference to particular examples, this model developed as an invented ‘idea’ of a stone at a distance. Its entire surface is hand-made, the eroded appearance indented by fingers and thumbs. This earthy, low-tech, tactile material would then be translated into stone by the most high-tech, mechanical means. The model's surface was then translated into digital data by being scanned with a hand-held scanner. The digital scanning and post-production was done by RapidformRCA

The digital scan of the clay model 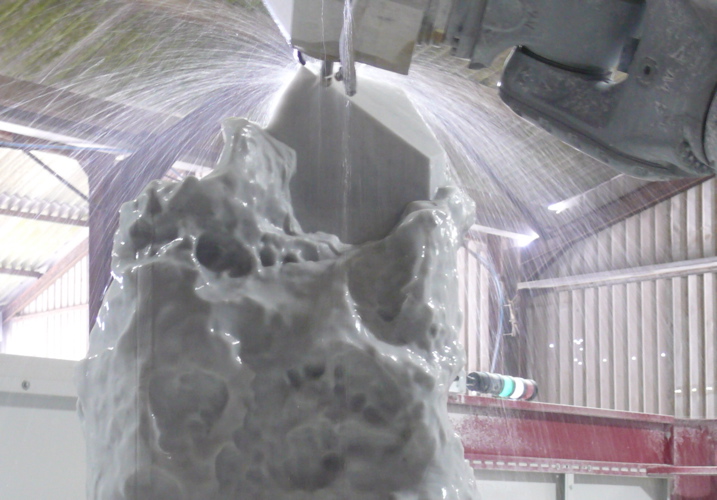 The scan was translated into stone using a 7-Axis robotic carving system. This cut the block in three stages. First, a coarse router removed the bulk of the waste. Next, a 25mm crown router (shown here) cut the contours and shape in greater detail. 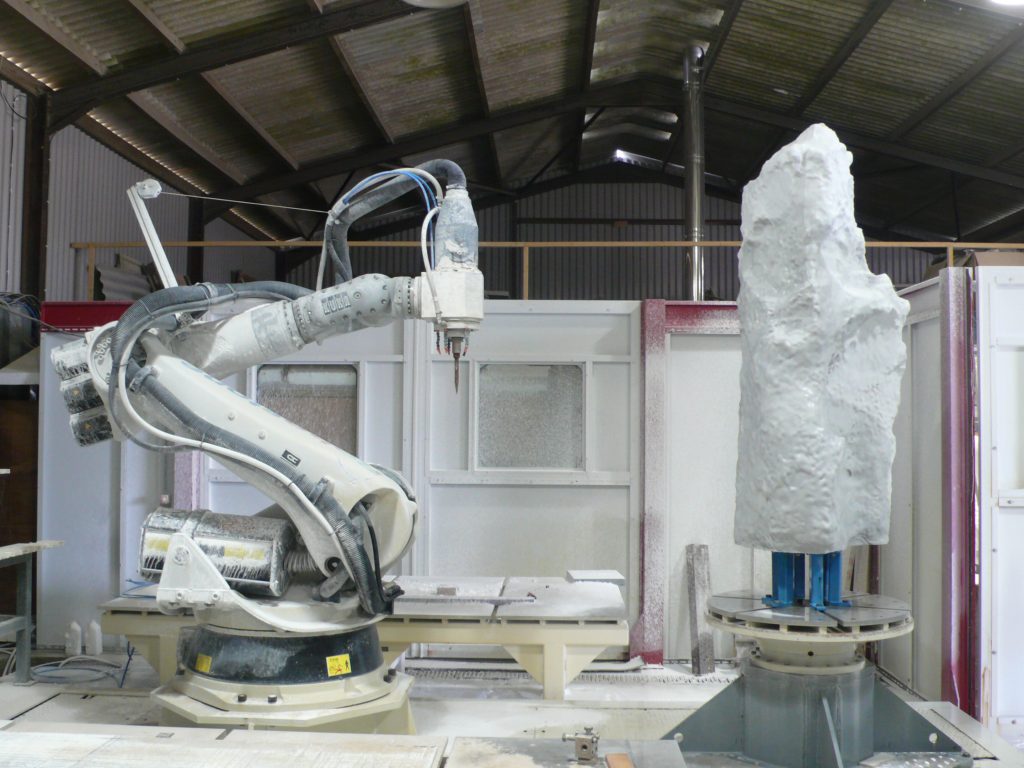 The first carved stone, and the 7-axis cutting machine 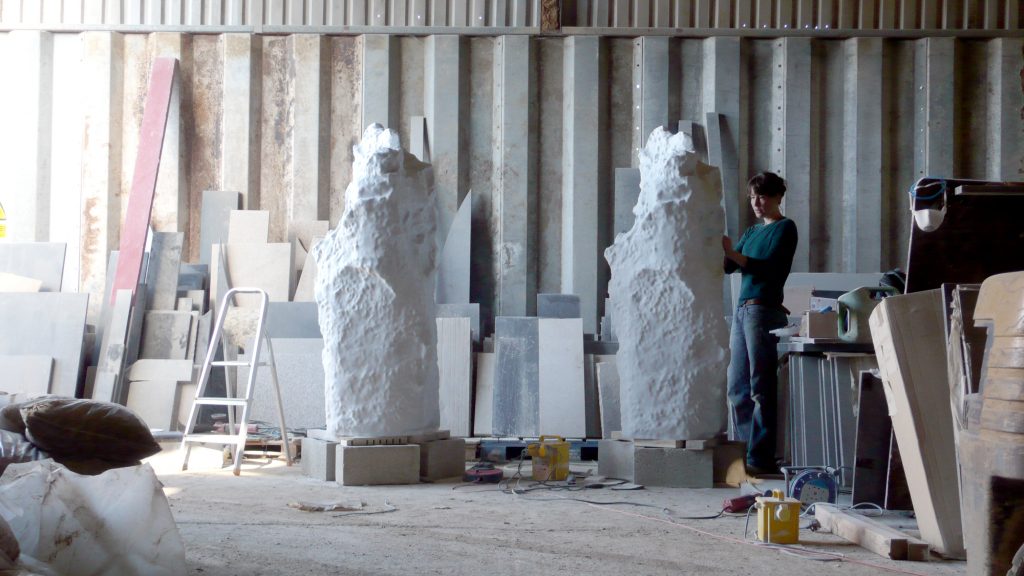 Lastly, the surface was completed with a 0.5mm tool. This produced the sculpture's finely-striated machined surface. The project's Carrara elements were made and sourced by Stoneworld. 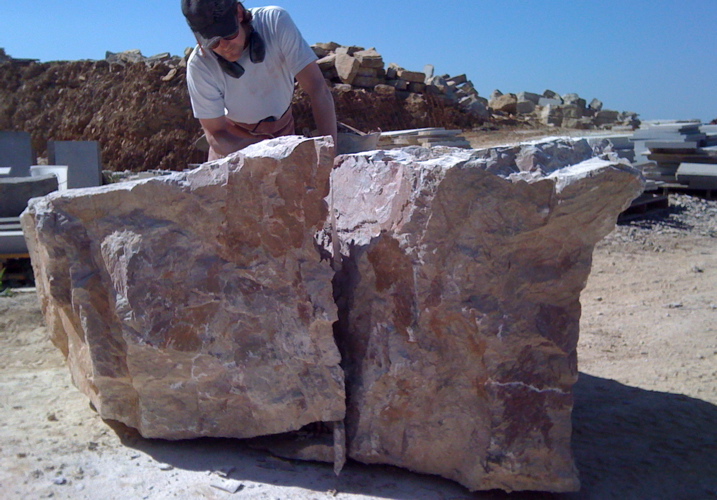 The irregular faulting of the Devonian limestone meant that 7-axis cutting was impossible, so instead I worked directly from the 'natural' blocks as sourced from the quarry. This meant that adjustments of each block's size and shape was done using ‘plugs and feathers’- tapered tools which are hammered into a line of drilled holes until the block splits along the perforated line. The drill holes were then dressed out using hand tools before being acid-etched. Because of potential faulting within the block, it was difficult to tell if each would be suitable until their bases had been sawn. This cut also allowed the stones to be stood upright so they could be altered and adjusted by hand. Once each stone's 'natural' shape had been modified by hand, they were then individually etched in an acid bath for 12 hours. 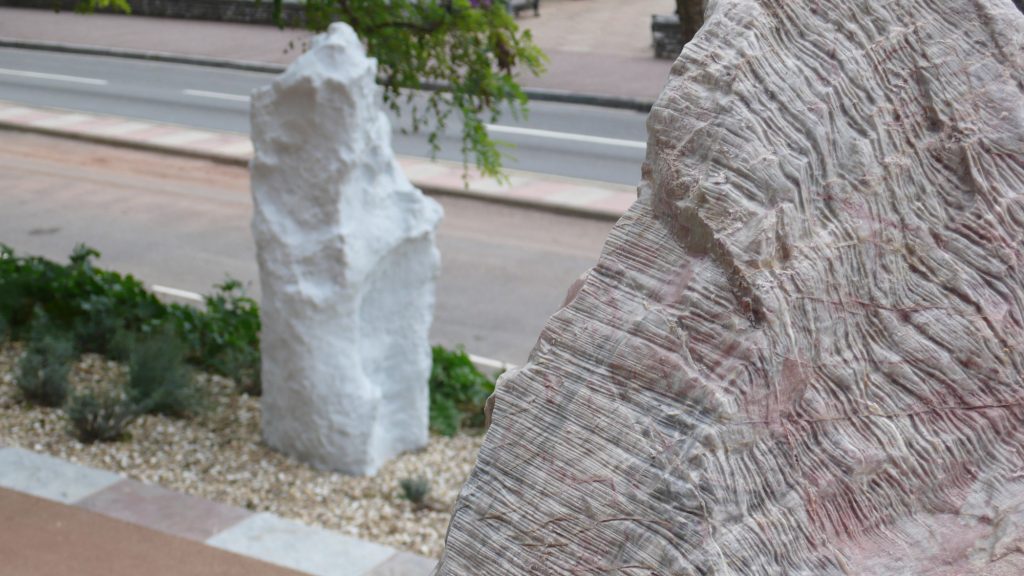 As shown in the initial tests, the etching process had the effect of both smoothing the stone's surface and producing a pattern of grooves that follow the irregular contours of the block, as seen here. No other surface treatment (varnish, wax polish etc) has been applied. Over the forthcoming years, the polished finish of the Devon and bright-white striations of the Carrara stones will alter and fade as they are gradually weathered down. This is both inevitable and intended, as the artificial erosive processes employed in their making continue to be modified by their exposure to the elements. 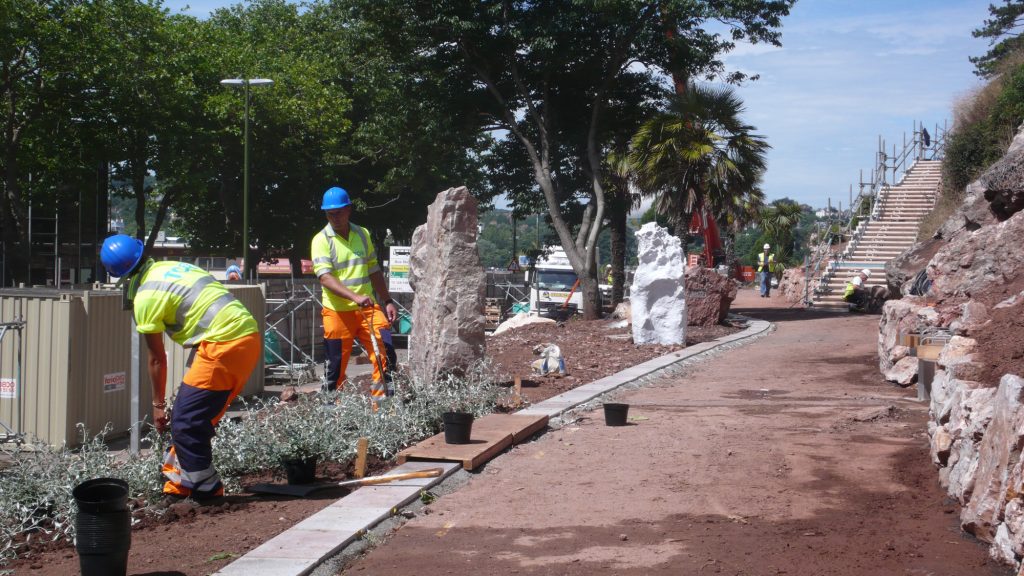 The first stone was installed at Royal Terrace Gardens in June 2010. The sculpture commission was devised as part of the extensive regeneration of the Victorian gardens, which includes ambitious cliff stabilisation work; a completely new cantilevered walkway ascending the height of the cliff with an integrated viewing platform at the summit; extensive repairs to the garden's existing paths and drystone walls, and a completely redesigned planting scheme.

One of the three identically-carved Carrara stones situated next to a retained magnolia tree. The strip of paving can also clearly be seen from this elevated viewpoint. The stones' positions within the garden were carefully considered. The garden has entrances at its centre and from its east and west ends, across which the paving runs as a threshold. It may also be approached from the cliff above, via the cantilevered steps, and seen from the road running 6ft below. 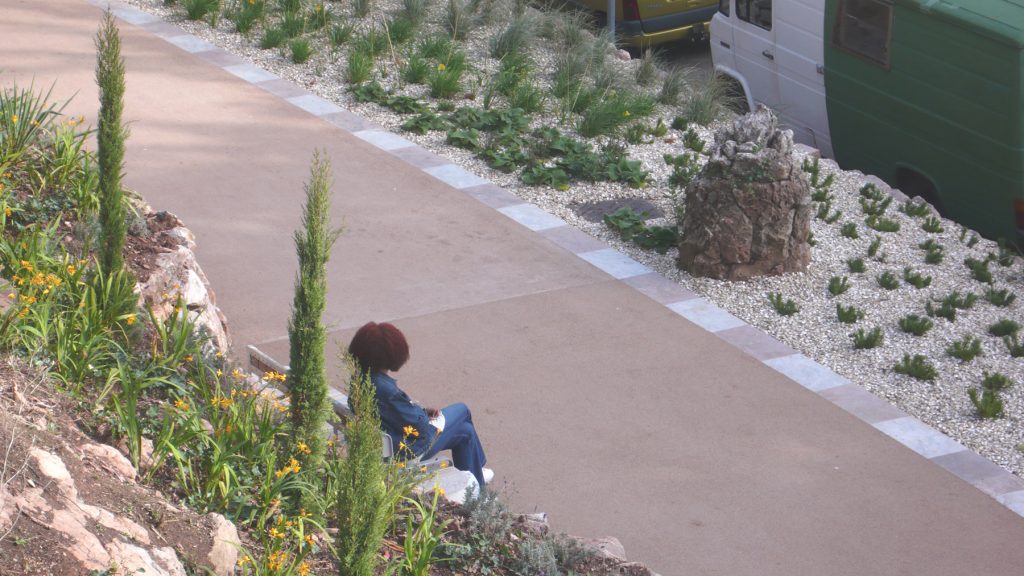 The path next to which the six stones are placed runs the entire 250-metre length of the site, forming a gentle curve around the base of the cliff. The curved cliff prevents the site from being seen in its entirety from any one situation, except from at a distance out at sea. The stones can therefore be seen from various positions- above, within or below the garden- but never all at once. My consideration of the potential of viewing positions and distances was again informed by Scholars’ rocks in Ancient China. ‘When a stone is put in a proper position, the front and rear sides are deliberately chosen. Some have one side fit for viewing, others two sides. Stones that can be appreciated from four sides are quite rare.’ One of the three Carrara stones