My project proposes a series of interventions into the existing condition of our unit’s site- Hampstead Heath. New threshold elements replace and enhance existing fences and boundaries creating new ‘rooms’ within the heath. These designs were informed by an extensive body of technical and contextual research, during which I mapped the historic and existing conditions and features of Hyde Park and Hampstead Heath; analysed and speculated on how living in such constant and close proximity to the digital realm might affect and be affected by our experience of making use of the park; and thoroughly investigated a fabrication process that would be appropriate for this context. 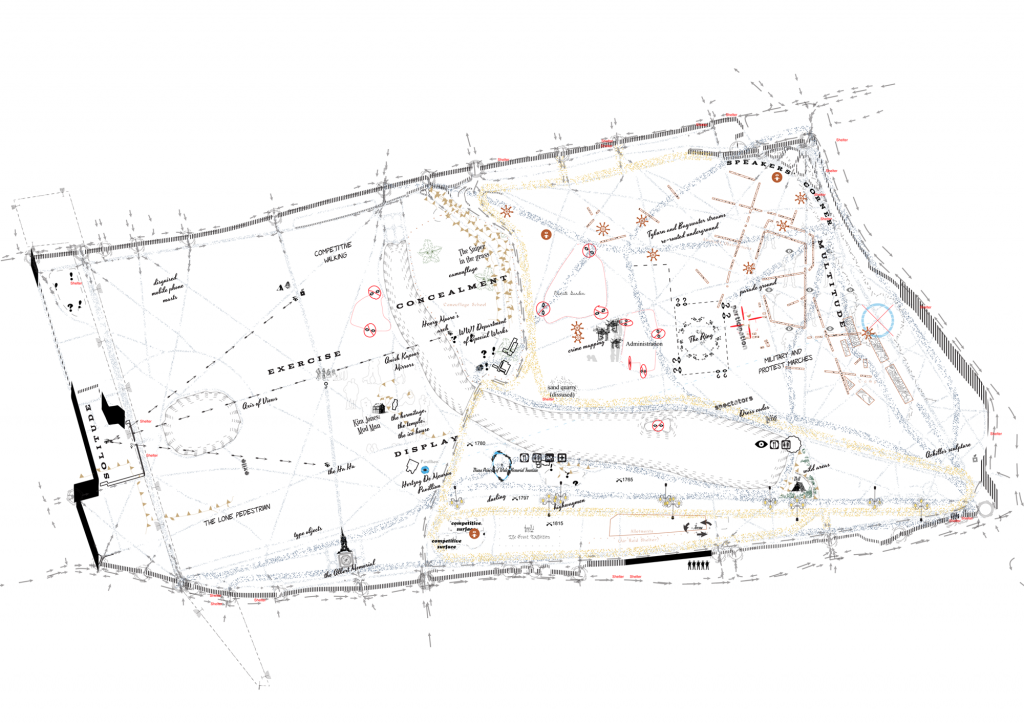 My project was initiated in an enquiry into the multiple characteristics of an urban park, and I made use of Hyde Park as a specific case study. This map overlays its current and historic features, uses and conditions. 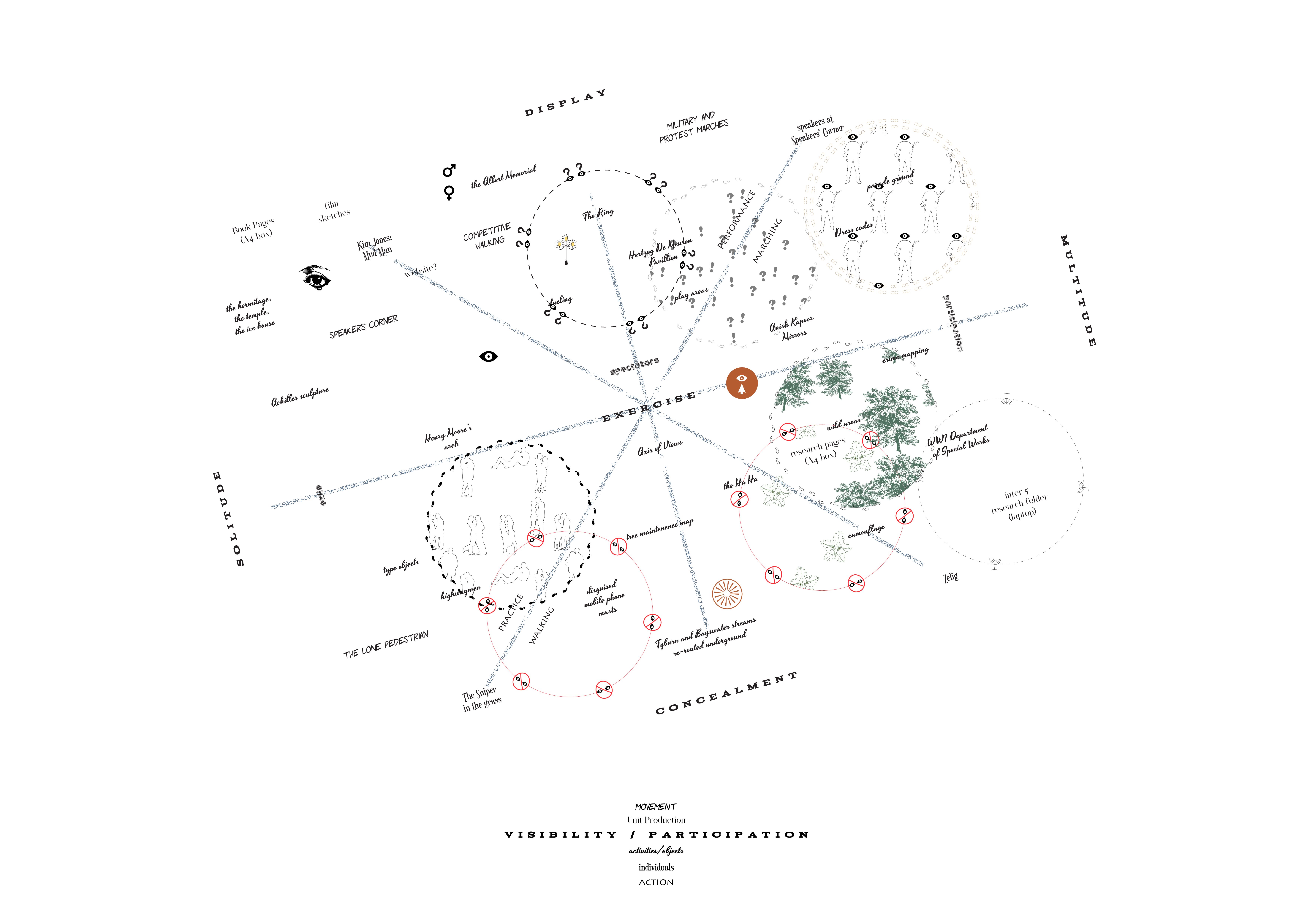 Having produced a 1:1000 map of this territory, these characteristics were plotted on this diagram on axis of 'solitude-multitude' and 'display-concealment' 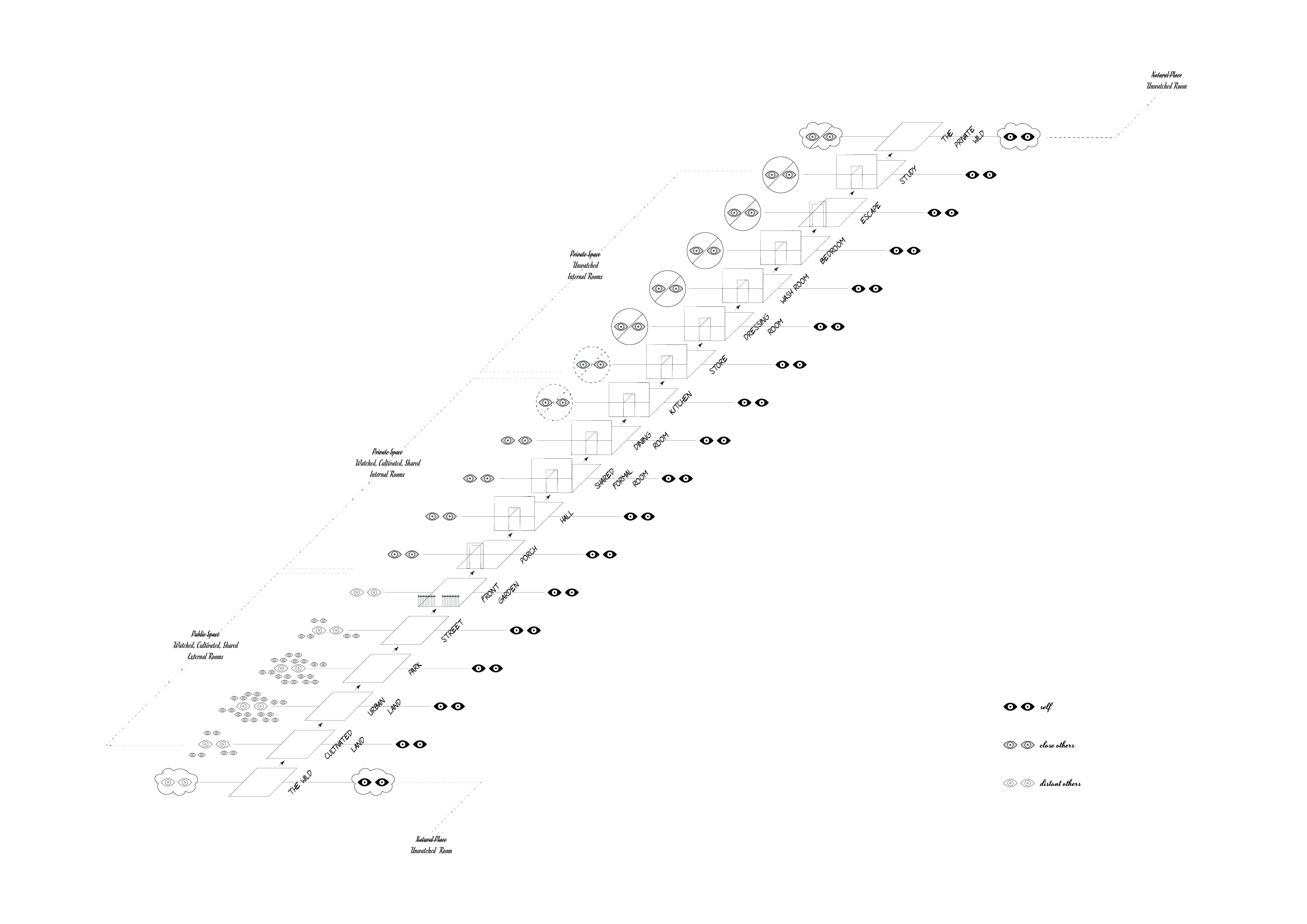 The axis of 'solitude-multitude' and 'display-concealment' became crucial for my project. Here, I imagined an enfilade-like sequence between the most private interior rooms of a home, through the shared social spaces of the city and out into the solitude of an uninhabited wilderness. 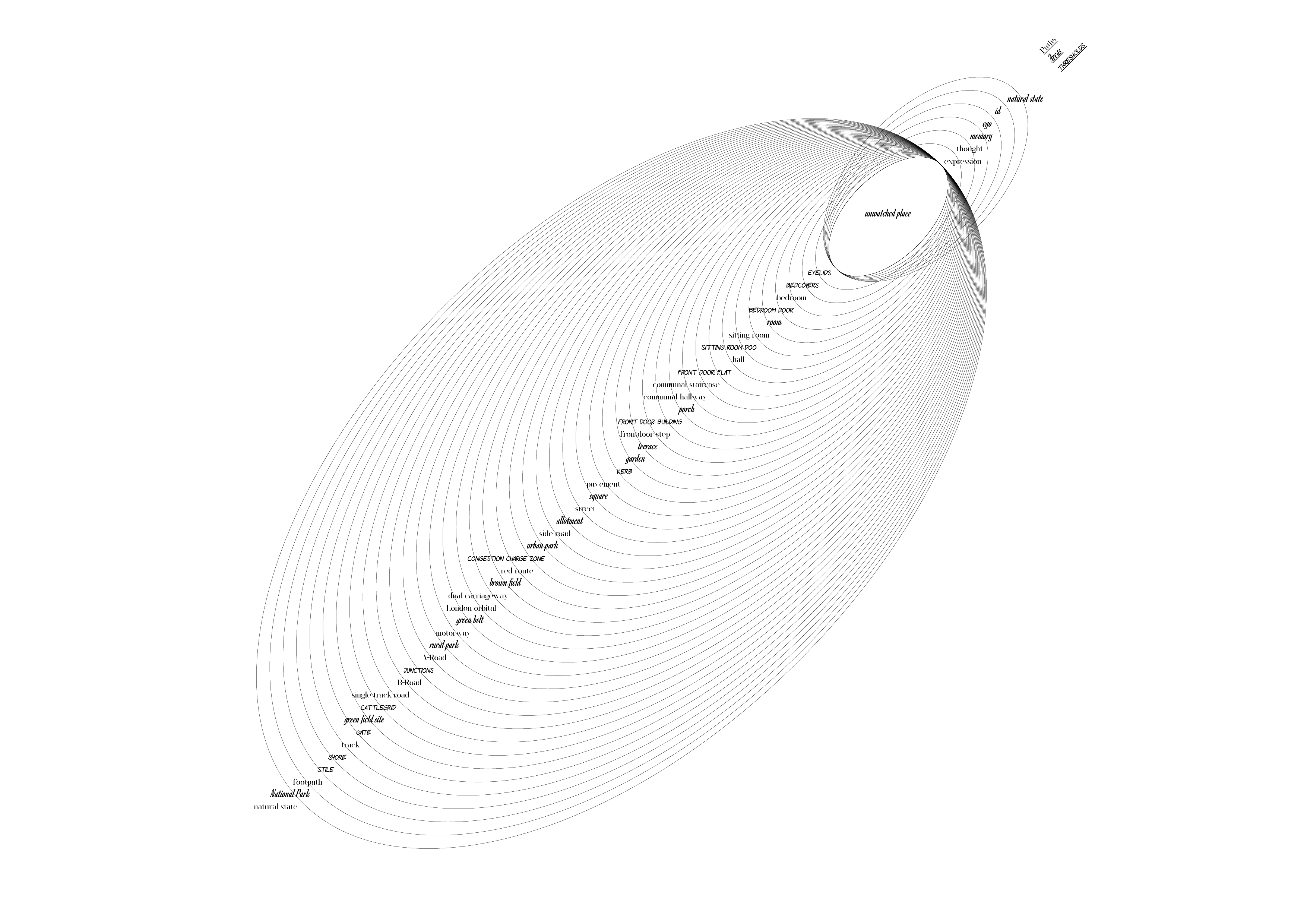 The same sequence, differentiated in terms of paths, areas and thresholds. I have also included imaginary interior mental 'space'. A 'natural state' is at both ends of the sequence. 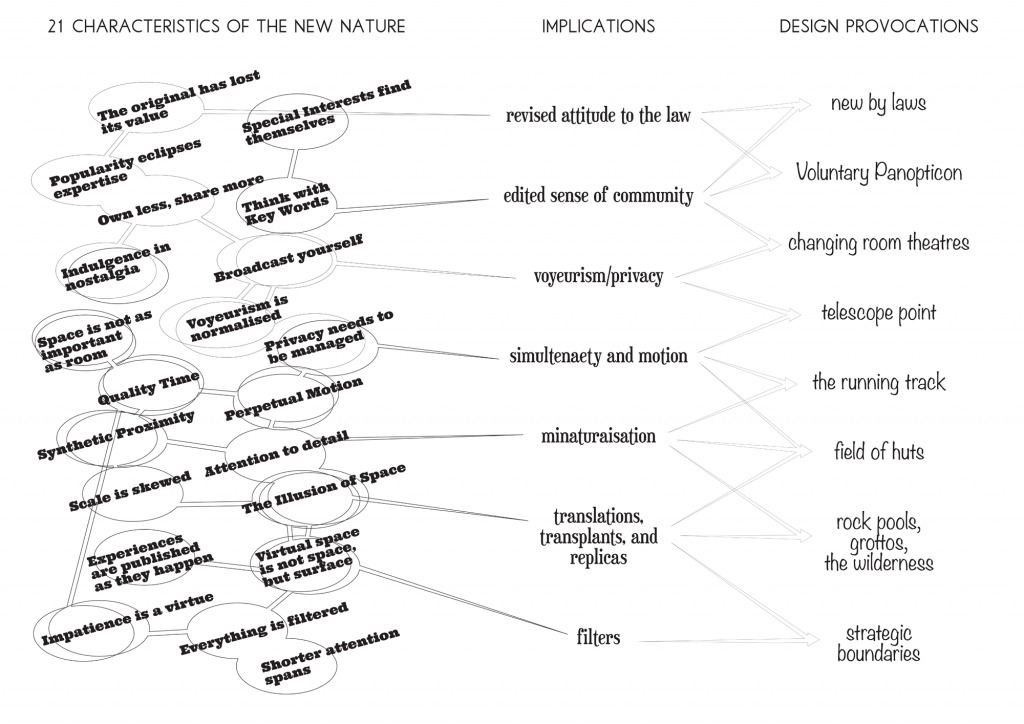 Unit 5 poses the question of what constitutes 'New Nature' in light of new digital paradigms, and what the architectural implications of this culture might be. As part of my searches, I produced an extensive research document and established these 21 characteristics, which suggested implications and design provocations. A selection of these- specifically, Strategic Boundaries and Changing Room Theatres- became the focus of my design development. 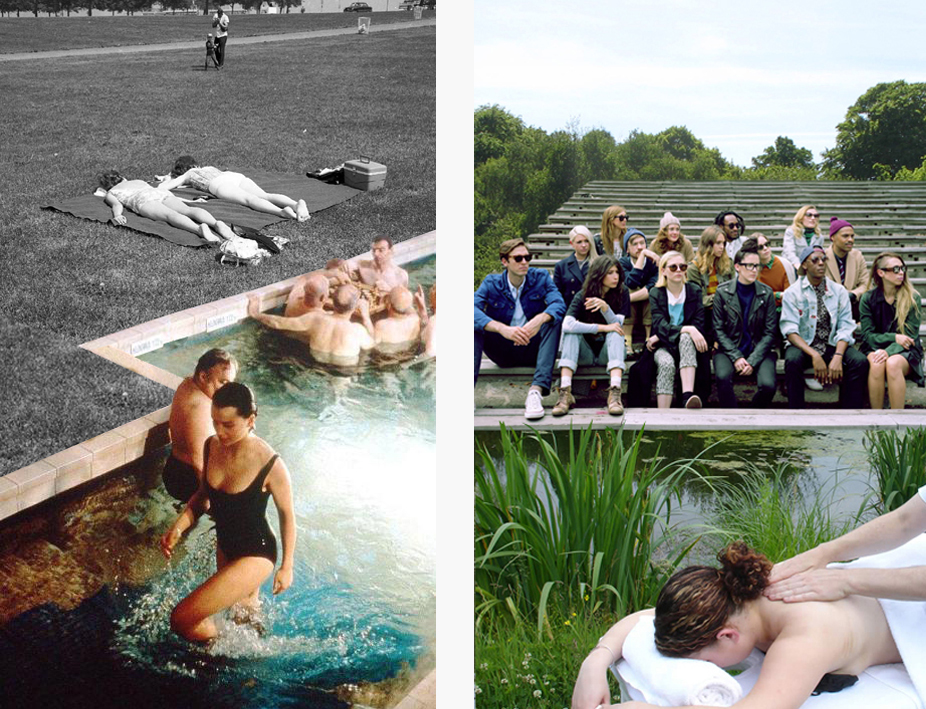 The materiality of these divisions was investigated, with divisions proposed in three materials: highly polished stainless steel, topiary, and plaster/render.

These collages suggested ways in which new thresholds or boundaries might create differentiated 'rooms' within the existing space of the park.

The materiality of these divisions was investigated, with divisions proposed in three materials: highly polished stainless steel, topiary, and plaster/render. 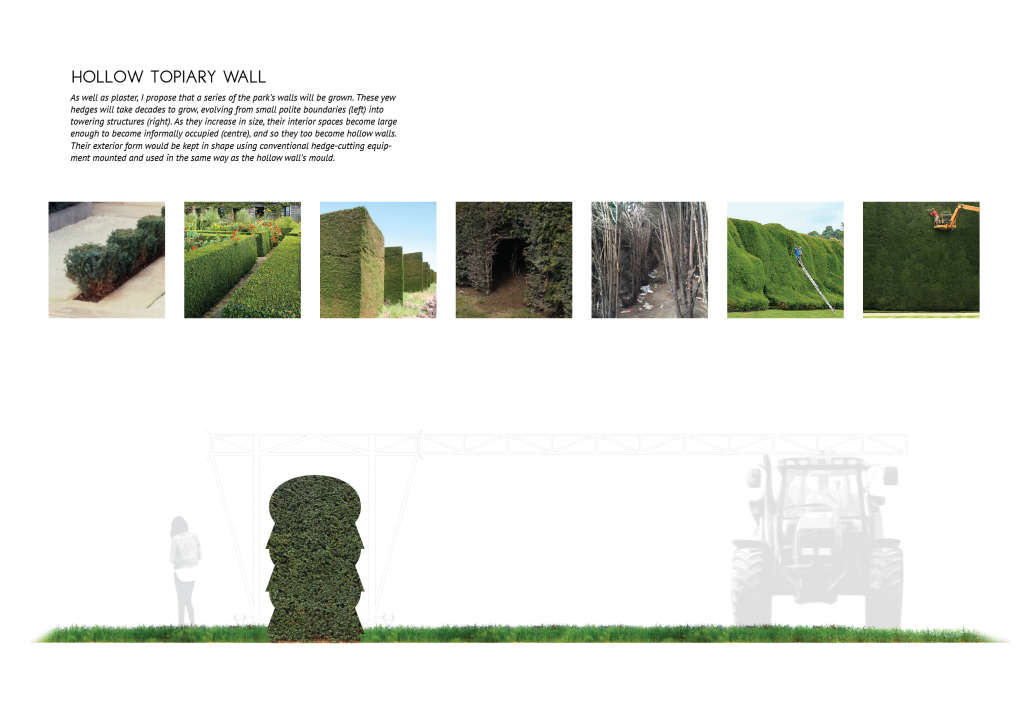 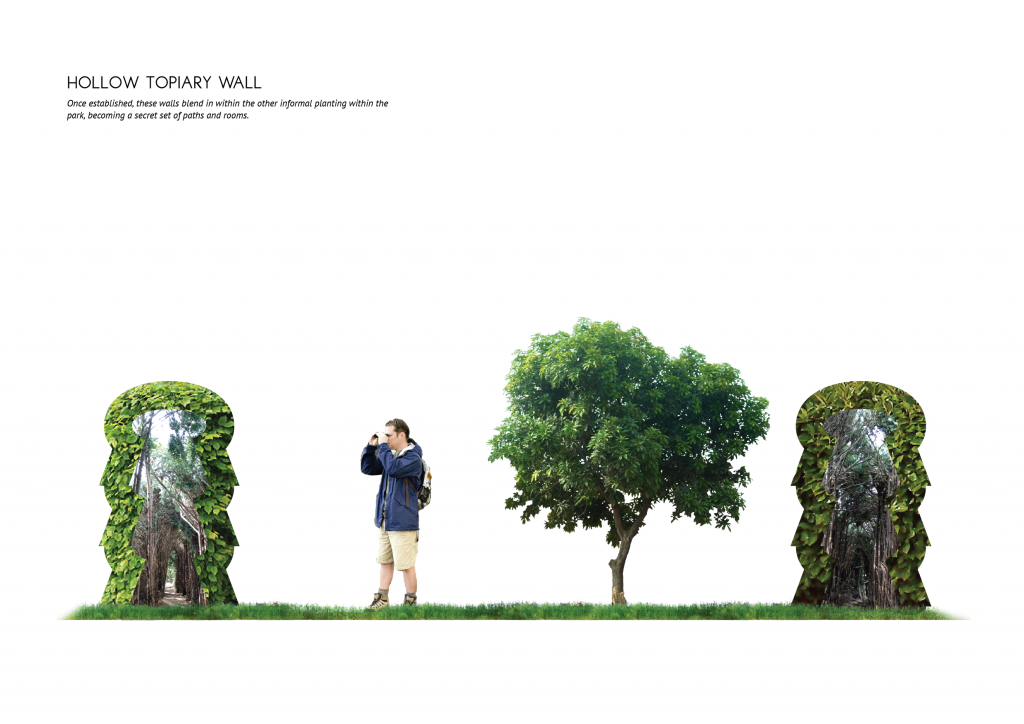 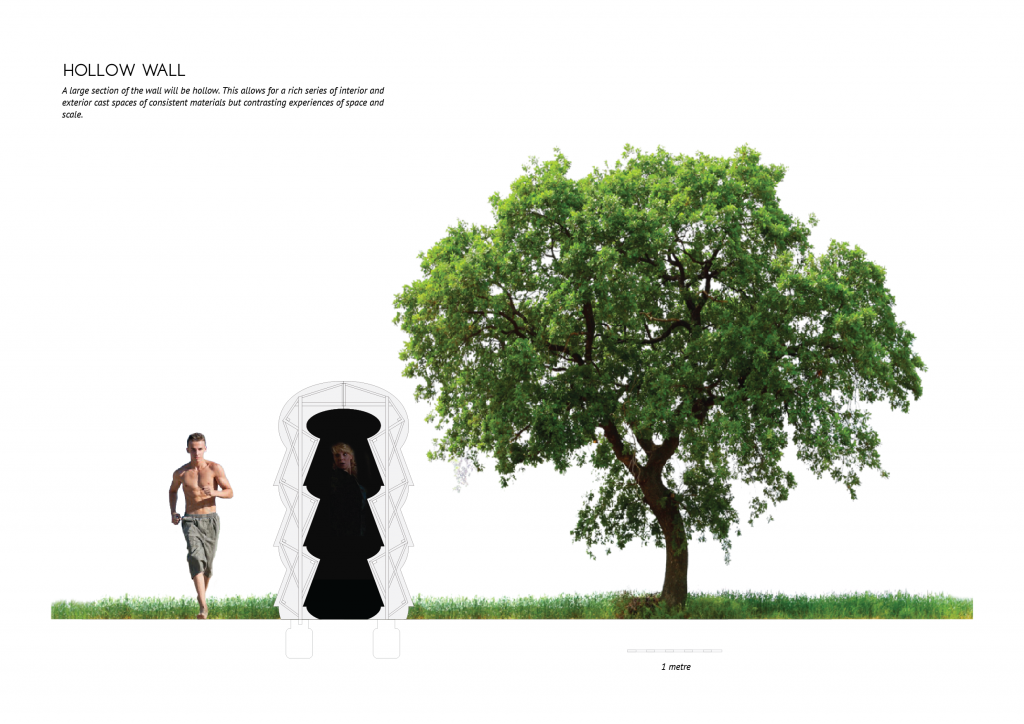 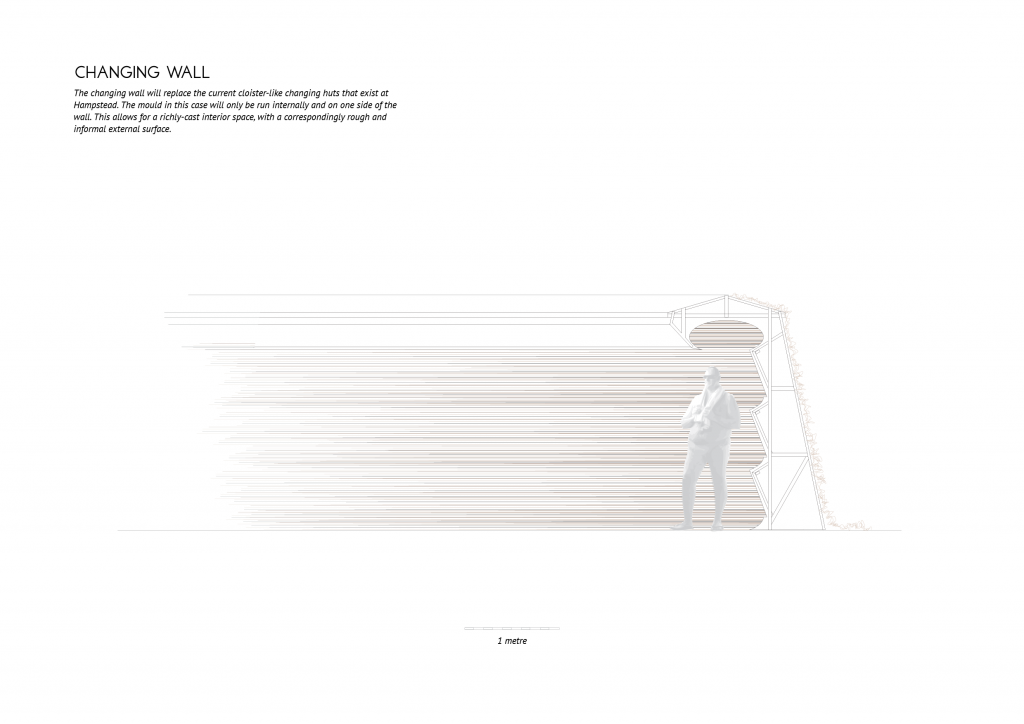 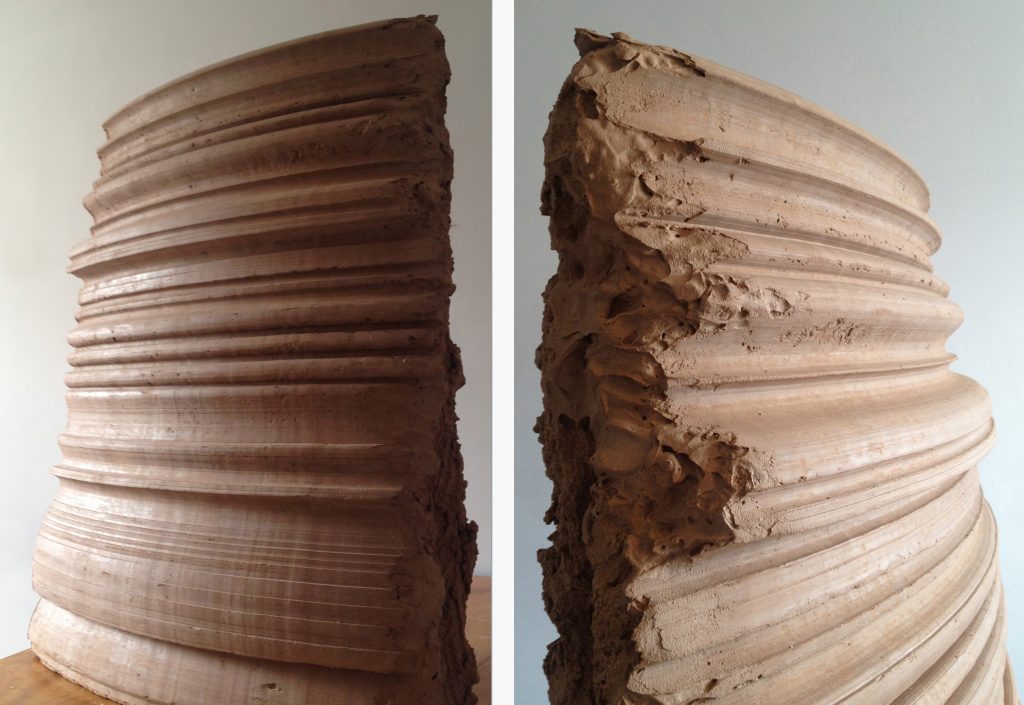 I worked through a series of material processes to establish an appropriate fabrication method. A way of producing curved mouldings using plaster and a running mould was chosen and tested at 1:1, which could be applied as a series of dynamic elements within specific locations of the park. This extensive material investigation resulted in a 250-page Technical Study, for which I was given one of only 11 High Passes awarded in the Intermediate School in 2013. 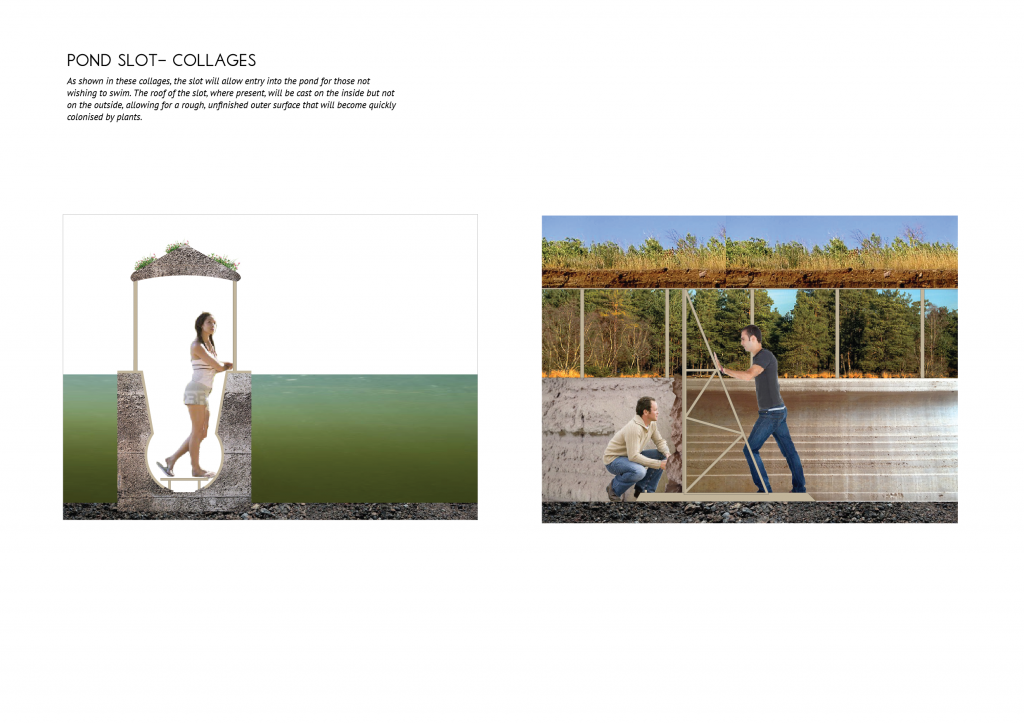 pond slot, made with a running mould 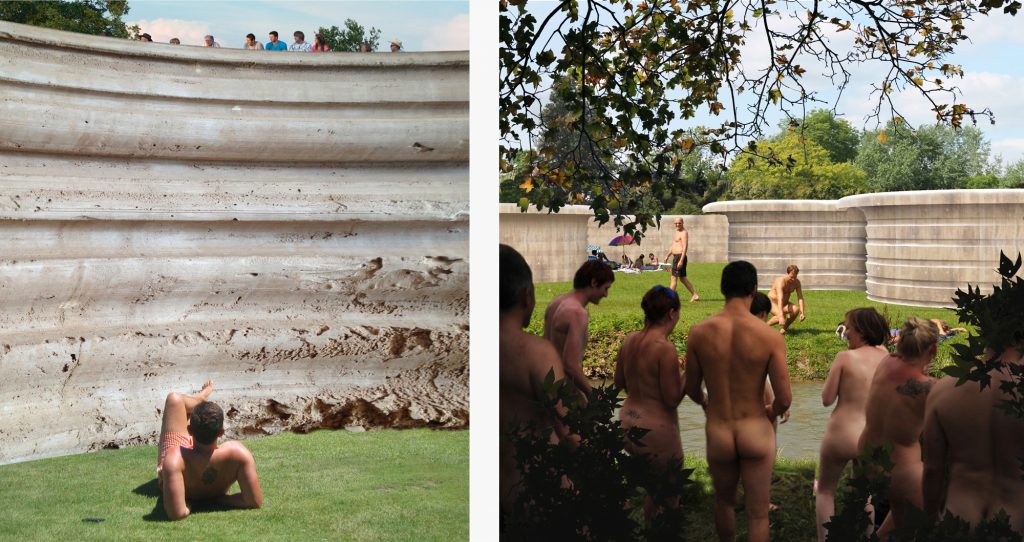 A series of sumptuous curved changing room walls, produced using the running mould, are proposed to replace the existing huts at the Mixed Bathing Ponds. 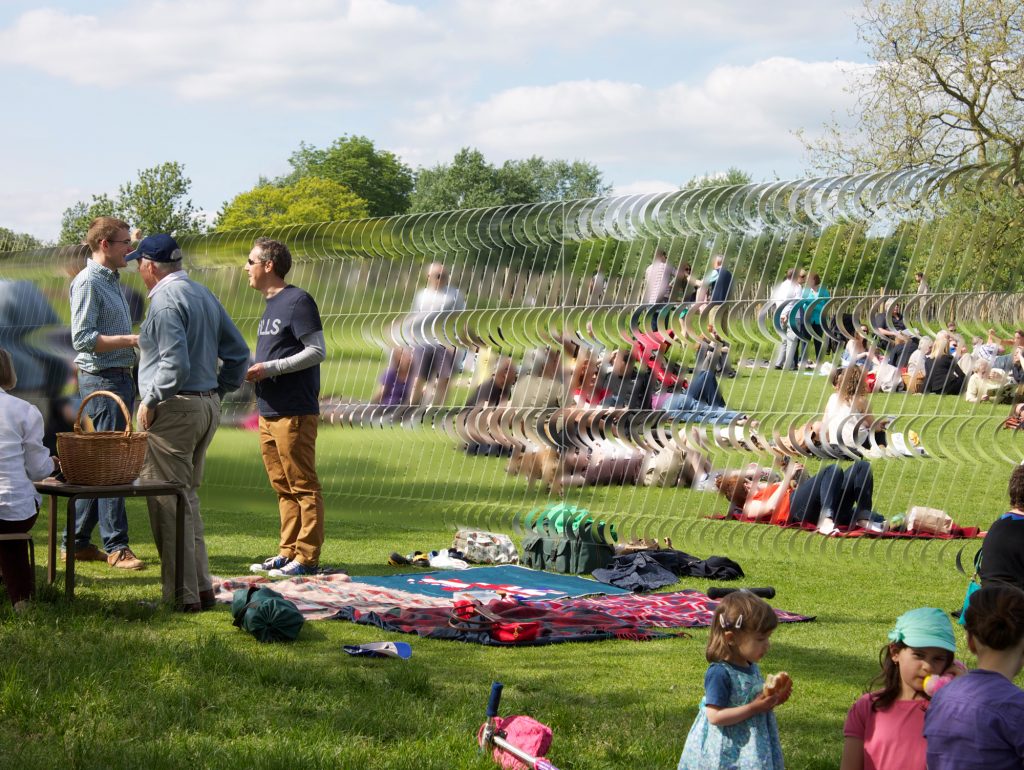 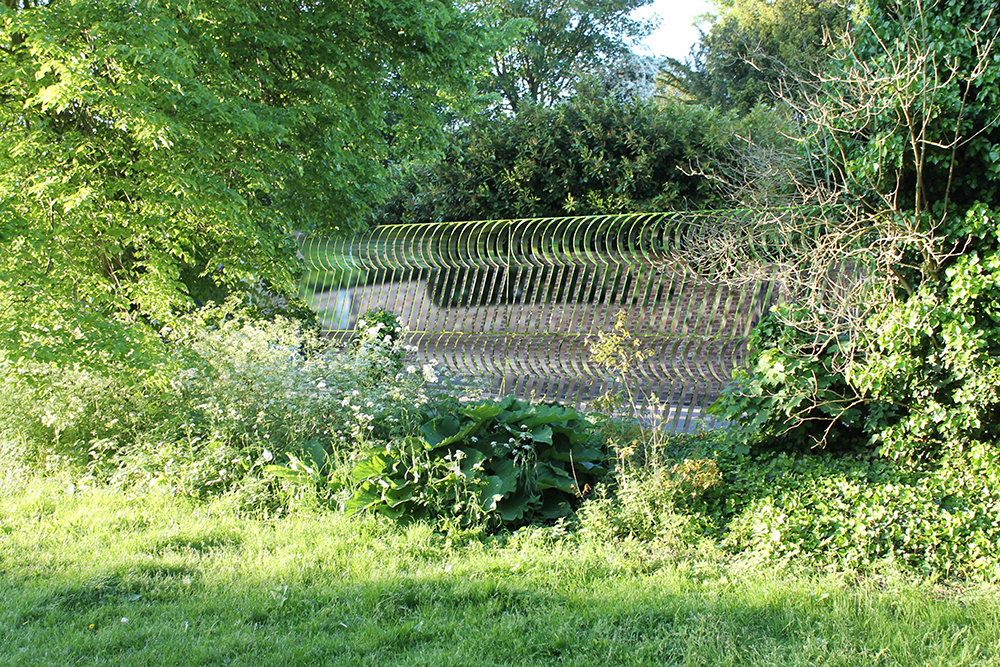 A mirrored stainless steel fence obscures the perimeter to the North East of the heath. 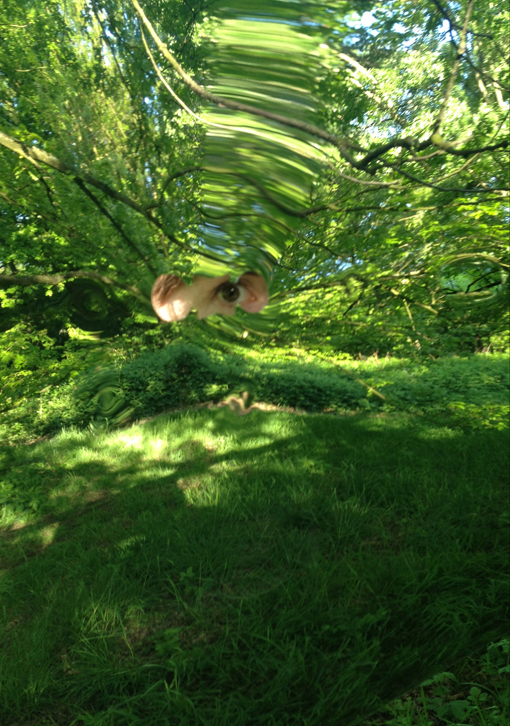 A stainless steel fence with strategic apertures conceals and reveals an inaccessible area left as a miniature wilderness within the artificially natural territory of the heath. The room created by this fence becomes the most solitary and the most wild. A 1:2000 map plots the locations of these eight elements within the heath. 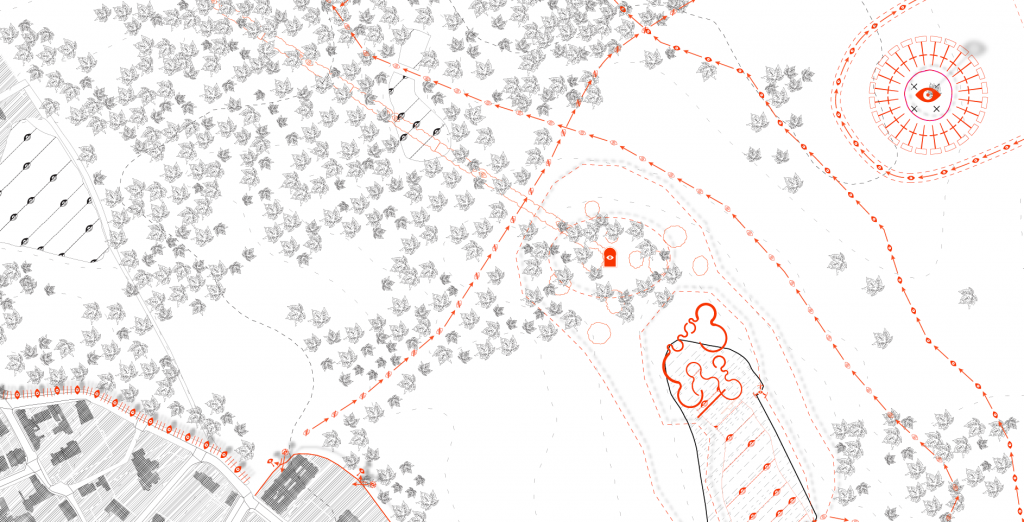 Detail of the final map.